Election season is in full swing and voters on the Navajo Nation will decide either to re-elect President Jonathon Nez to the seat, or make history by electing his challenger––Buu Nygren–– who could be the youngest ever to hold the position.

New Mexico in Focus Correspondent Antonia Gonzales with our media partner New Mexico PBS sat down with Nygren to chat about his upbringing, his views on public health restrictions, and why voters should consider him at the polls. Nygren was born and raised on the Navajo Nation.

BUU NYGREN: My mom had me when she was 15 years old. I'm half Navajo, half South Vietnamese people. Grew up here with no running water, no electricity. I lost my mom to alcoholism about two years ago. And I grew up just in poverty, despite a lot of Navajo people currently still live like that. So I feel like I'm a candidate that truly understands the everyday struggles of being on Navajo. And I really want to give hope to the next generation and the current generation. So, I feel like I’m well rounded. I know the experiences and the expectations and most of the wants of the Navajo people are: water, roads, electricity, better public safety treatment centers, and really trying to create safer and healthier communities.

Everybody's leaving the Navajo Nation. I think through the 2020 census, you can see that more Navajo people live off the reservation than they do on the Navajo Nation. And one of my goals is going to be to try to reverse that, so that our people continue to enjoy the homeland just as they did 50 years, 100 years ago and make sure that opportunities here on Navajo far exceed the outside. I also have a running mate, Richelle Montoya. She's from Torreon, New Mexico. If elected, she will be the first woman female vice president of the Navajo Nation, the highest elected female leader in our nation's history.

NYGREN: I think the Navajo Nation is ready to re-open, because living here during the pandemic, a lot of us had to go to town, a lot of us had to go into the border towns to go buy the things that we need to do. Every community around us reopened with the plan. But on the Navajo Nation, we've continued to stifle our communities, scare our people. And since I made my announcement on April 4, being the first person to announce for president, I said it's about time we reopen 100% because there's a lot of Navajos that are vendors, that are craftsmen, quilters to Navajo business owners to even the government within itself. Some of its enterprises are really suffering. We're just increasing poverty, we're making it difficult for our people to fend for themselves. And as President, one of the things I've always said was, I am anti-poverty, I will do whatever it takes, so our people have an opportunity. Because just growing up in a household where there's not enough money for anything, I understand that if someone has the opportunity to work and make something for themselves and help their community and their family, because a paycheck on Navajo is just not a paycheck for an individual, a paycheck on Navajo is a paycheck for basically the whole family. A lot of those monies are shared. And that's what's important to me. And I feel like that's what the state of the Navajo Nation now is: we're ready.

ANTONIA GONZALES: You had mentioned your running mate. We know that Navajo women are an important part in Navajo culture and Navajo way of life. So, how did you come about picking a woman? And like you said, if elected, there has never been a Navajo woman serving in the top office.

NYGREN: And I think that was another decision I made because I had a lot of people say that was going to be the worst decision that's going to tank your campaign. But personally, I felt like there's a lot of young Navajo women down from one years old to people in their mid 40s, their 50s that they feel like there should be representation in the president's office. Because growing up there's so many single moms that play both roles. Why not have that representation in the president's office who also represents everyday Navajo people? She's had her challenges in life. She's had her ups and downs with working, taking on positions and then as far as a mother as far as a single mother as far as losing her own child, things like that. I really wanted somebody that people could relate to. Real representation. Because for far too long, the everyday Navajo people are being forgotten. 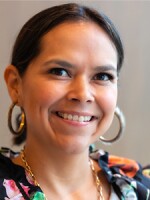