Songs that express the current social conscience and feelings aren’t missing. Lupe Marroquin and Carlos Flores funded Mezcla Latina in 1999 as a Trio singing traditional romantic songs and boleros. Our community’s need for performing Latino musical groups made other members become part of the group’s spirit during the last decade; with their experience other musical genres were explored and repertoire broadened. In lead vocals and guitar is Lupe Marroquin; in lead guitar and vocals, Steve Zamora; in bass guitar, Mark Merritt; in Accordion and keyboard, Enrique Cardiel; in percussions and vocals, Carlos Flores. At this point Mezcla Latina says it’s exploring their mixed musical feelings and wants to create its own musical pieces, as far they have two originals: “Despierta” and “You’re Still Gone”, you notice in them a little of Old School R&B and some Jazz thrown in. It is also typical to see this group perform in community socio-cultural events, and in support of Latino community advocacy groups. They say they won’t stop performing in support or our Latino advocacy issues. Mezcla Latina released tow CDs, one in 2003: “Recuerdos de Ayer”, and another in 2010: “Musica Sabrosa”. 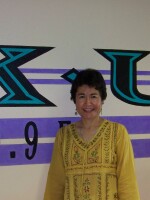 Guille Quiroz
Global Music and Raices Collective DJing are where she got her start in 1996. KUNM covers her musical passion for Latin American & Chicano music. The wonderful culture reflects in alternative music and she loves to share its instruments and most representative composers and singers from all eras.
See stories by Guille Quiroz