In the American Southwest, a rare genetic disorder known as the Common Hispanic Mutation has haunted those of Spanish descent for nearly 400 years. It's been called "El Frio," or the cold. Now, to understand the disease, researchers in New Mexico are digging into the genetic history of residents. From member station KUNM in Albuquerque, Tristan Ahtone reports.

TRISTAN AHTONE, BYLINE: Jenae Jasmine Gallegos liked playing on the trampoline with her two brothers, biking, skating and cheerleading. She was 9 years old when she died in Santa Fe.

TIM GALLEGOS: She had a cheeseburger at lunch, the last day of school; and just came home feeling flu-ish and having a headache. And it just seemed like a bad cheeseburger.

AHTONE: Tim Gallegos is her father. Sandra is her mother.

SANDRA GALLEGOS: She had had headaches before, and they seemed pretty bad, but when we would give her Tylenol, her headaches would go away. In the morning, when Tim got up, she wasn't responding, and we knew something was really wrong.

AHTONE: Jenae had a blood clot in her brain stem, the end result of the Common Hispanic Mutation, or Cerebral Cavernous Malformation - CCM1 for short. The disease causes the body to form bubble-like blood vessels in the brain and spinal cord that often look like raspberries. And they can leak blood into the brain, or swell, often leading to fatalities or serious neurological disabilities.

AHTONE: Dr. Leslie Morrison is director for the Cavernous Malformation Clinic at the University of New Mexico. She says in the past, the disease wasn't well understood, and often misdiagnosed.

MORRISON: So we get way too many brain tumors in the family histories of patients who have this disease. Or they might say they were in a wheelchair, and we never knew what caused it.

AHTONE: Morrison says those family histories may be key to understanding the disease. Much of New Mexico's Hispanic population traces its bloodlines from Spain, not from Mexico - back to conquistadors that colonized the region. The CCM1 gene occurs other places in the world, but the American Southwest is the only place where large clusters are found. That likely means that New Mexico's cluster is descended from one colonial couple.

AHTONE: Joyce Gonzales is an amateur genealogist who helps families trace their relationship to the disorder. She began tracking CCM1 after she was diagnosed herself. Gonzales says it's unknown whether Juan Peres De Bustillo, or his wife, had the mutation.

GONZALES: But what we can be certain of is that whichever one of them had it was the first grandparent to bring it to New Mexico. And all of us here in New Mexico, southern Colorado, and eastern Arizona with the CCM1 - all descend from that pair of grandparents.

AHTONE: So to map the disease, researchers have to build some very complicated family trees. By identifying descendants who may have CCM1, researchers can gather patients to study the disease and develop treatments.

For the Gallegos in Santa Fe, this is very important. After losing his daughter Jenae, Tim and his wife say they now feel like they're racing to find help for their 11-year-old son, Joel, who has also been diagnosed with CCM1.

TIM GALLEGOS: It's just very hard living your life with a big question mark hanging over your head all the time.

AHTONE: Researchers in New Mexico currently have around 500 Cavernous Malformation patients logged in their database. However, those same researchers suspect that thousands more in the southwest have the disease, but have yet to be diagnosed. 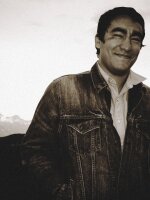