More than 7,000 people gathered in the Albuquerque Convention Center on Friday to hear Democratic presidential candidate Bernie Sanders speak. It was just hours after he spoke at the Santa Fe Community College. Enthusiastic supporters waited in a half-mile-long line for nearly an hour and hundreds were turned away when the venue was full.

KUNM’s Marino Spencer chatted with folks to find out why they’re ‘feelin’ the Bern.’

Downey Cheaten, Albuquerque: I’ve lived here for about nine years. I’m here because Bernie Sanders is talking the talk that we need to hear. Hillary Clinton is a corporate Democrat. She does not represent the people. Bernie represents the people. He seems to understand the needs of the middle class, the importance of the middle class, importance of education. We could get rid of one missile program in the government and send everybody to school for free.

Cristina Tartaglia, Albuquerque: I’m here because my daughter and her friends are part of NACA’s Sweet Nations Sisterhood and they came to do a jingle dress prayer for Bernie Sanders and the rally-goers. I don’t think much of Donald Trump. I think he’s smoke and mirrors. I think the real fear lies in the Republicans who really stand behind what they say. I don’t really have too much of an opinion on Hillary Clinton. I would hate to see a woman use the woman card just for votes and I’d just rather vote for someone I think is better for the job.

Rebecca Robillard, Albuquerque: I’m here at the Bernie Sanders rally because I believe in Bernie. He is an inspiration for hope for my generation. I’ll vote for him because he stands up against the corporations that are hiding behind the government. And I don’t appreciate all the lying. And I really hate Hillary Clinton. I think Donald Trump is Hitler reincarnated.

Jacob Gamble, Abilene, Texas: I feel that this country is in a place where it really needs profound change. I think that many of our systems—our infrastructure, our education system—are broken. And we need to evaluate and look to the future. I feel that Hillary Clinton is a tad dishonest. I feel that she has been on boards of many of the corporations that my fellow peers out here are fighting. I think if Sanders doesn’t get the nomination, I’m still going to support the Democratic nominee because I don’t feel that Donald Trump is an applicable candidate for president of this country.

Rocky Cordova, Ruidoso: One of the reasons I didn’t really get behind Hillary is for many years and years she was really against gay marriage and wanted to make [heterosexual marriage] a constitutional amendment. And for me that speaks volumes on the character of a candidate. We’re the next generation of this political system and if we’re not involved, what’s the point of even showing up? And a candidate like Bernie Sanders really brings out young people. And for me I really am a Bernie or bust kind of guy. I would love to throw my support behind Hillary Clinton. But it’s not going to happen. I feel that Donald Trump brings out a lot of the worst parts of our country and a lot of our biggest fears and our attitudes that couldn’t be any worse towards minorities and women and gay people. I think he’s really just playing on people’s fears. 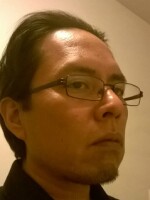 Marino Spencer
Marino is Diné (Navajo) and grew up in Gallup. His interest in journalism started with the now defunct radio station KQ93 FM.
See stories by Marino Spencer