Produced by Kent Paterson, Marty Adamsmith and Mercedes Mejia. Support provided by the Arts and Culture Department and the Urban Enhancement Trust Fund of the City of Albuquerque.

Note: Part One aired Saturday, May 8,  7 pm on Ear to the Ground. Both programs can be heard up to two weeks after their airdates by going to the "Programs" tab at the top of the KUNM website's homepage and scrolling down to the two-week archive. 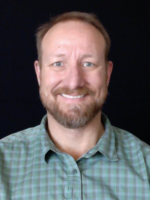 Tristan Clum
Tristan began his career in public radio in 1988 as a reggae show host and programming assistant at KNMS-FM in Las Cruces, New Mexico. In the decade that followed, he worked as a public television producer and as an assignment editor for the Albuquerque NBC affiliate. Tristan graduated from the University of New Mexico in 1992 with a degree in political science. He has won numerous awards for reporting and anchoring from both the Arizona and the New Mexico Associated Press.
See stories by Tristan Clum