Wed. 11/14 1:30p: Afternoon Free Form host Tanya Cole will speak with Sas Bator Colonnas and Diego Pani. They are from Sardinia, Italy and are visiting New Mexico in honor of the Society for Ethnomusicology conference taking place this week in Albuquerque. Sas Bator Colonnas will make their debut performance in the United States right here in Albuquerque at the Outpost Performance Space on Friday, November 16th.

Sas Bator Colonnas is a multipart singing group from the Scano di Montiferro, a mountainous region in central Sardinia, Italy who started singing together in 2002. They carry on the vernacular multipart singing practice— one of the most representative cultural forms of their village—which is performed by four male singers and is called ‘cuncordu.’ Diego Pani is the manager of the musical patrimony of the Istituto Superiore Regionale Etnografico (ISRE) and a Ph.D. Student in Ethnomusicology at Memorial University of Newfoundland. His research focuses on the dynamics of music performance of young generations of musicians. 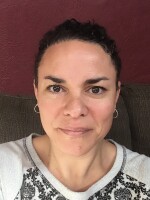 Tanya Cole
I grew up in Albuquerque and have been listening to KUNM for more than thirty years. I have always been a lover of music. WKRP in Cincinnati has a special place in my heart. I got my start in radio in college in Oregon at KBVR Corvallis. I dj-ed and managed the station as well. That experience afforded me many opportunities to learn about music and broadcasting, as well as meet some great people. I also volunteered at KBOO in Portland, OR mostly helping with live music events. I volunteered at KUNM during 2004, mostly hosting Performance Today and the occasional Overnight Free Form. I returned as a volunteer in 2014, hosting Performance Today on Tuesdays and eventually ending up as a Monday Afternoon Free Form host. Currently, I work behind the scenes in the Production department. I also am on the air as a fill-in host for Morning Edition, Weekend Edition, and All Things Considered.
See stories by Tanya Cole