The race for New Mexico’s top prosecutor is between the current Bernalillo County District Attorney and a newcomer with one legal win already during this campaign cycle.

Raúl Torrez wants to transition his experience as the DA in the largest county in New Mexico up to Santa Fe to be the state’s chief legal officer responsible for enforcing state law.

Torrez was elected in 2017 to lead the Bernalillo County DA’s Office. Before that he held a position with the Department of Justice under the Obama administration.

Enter Republican Jeremy Gay. A District Court judge ruled in late September he could remain on the ballot after a legal challenge about whether he met residency requirements.

His legal experience started as a U.S. Marine Corps Officer where he was a judge advocate, defending active military members and offering legal advice. He moved into a role as a special assistant with the U.S. Attorney under the Trump administration, where he said he prosecuted, trained and assisted federal law enforcement officers in investigating and prosecuting crimes.

Gay told the Albuquerque Journal he supports a settlement in the fight over Rio Grande water between New Mexico and Texas that’s before the U.S. Supreme Court. He said he would like to see the AG invest money in prosecuting organized gangs. His tough-on-crime approach is aimed at punishing people with multiple arrests, but he does not present specific ideas. He said he would support the state law when it comes to reproductive rights — a law that is tacit but could change with legislative efforts.

Gay could be a long shot to win this seat. Torrez has name recognition, cash advantage and the Democratic Party machine behind him. A Journal poll in August showed he had a 16-point advantage over Gay. However, Gay released numbers from GOP-pollsters Cygnal, showing a near deadlock between the candidates.

Gay’s advertising has more prominence on the airwaves, which could lend some credibility to his poll showing a major jump. If anything, he already won at least once during this general election cycle when a judge ruled in his favor over an attempt to remove him from the ballot by a group questioning his New Mexico residency. 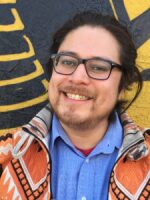 Shaun Griswold, Source NM
Shaun Griswold is a journalist in Albuquerque. He is a citizen of the Pueblo of Laguna, and his ancestry also includes Jemez and Zuni on the maternal side of his family. He grew up in Albuquerque and Gallup. He brings a decade of print and broadcast news experience. Most recently he covered Indigenous affairs with New Mexico In Depth. Shaun reports on issues important to Native Americans in urban and tribal communities throughout the state, including education and child welfare.
See stories by Shaun Griswold, Source NM