New Mexico in Focus Correspondent Gwyneth Doland with our media partner New Mexico PBS sat down with Leger Fernandez to discuss how she helped secure funding for Hermit’s Peak fire, her thoughts on reproductive rights and how she’s campaigning in her newly redrawn district.

GWYNETH DOLAND: What are you most proud of accomplishing since you’ve been Congress?

TERESA LEGER FERNANDEZ: What I’m most proud of is, of course, the Hermit’s Peak fire assistance bill, because that was such a long shot. People didn’t think we’d be able to get it done. But I knew that I was not going to stop until I could get compensation for all those families and businesses who had lost so much. I knew I had to make it happen, and we did — $2.5 billion as just the first installment on what we need to recover, to rise from the ashes. And you know what, this is what justice looks like. When the government messes up, when they destroy so many homes and livelihoods, they should say, yes, it’s our responsibility to take responsibility and then to pay the damages. We actually are delivering justice at the same time that we’re delivering hope. I want to make sure that these communities know that hope is on the way, resources are on the way.

DOLAND: Why do you think we should not get in the way of access to abortions after 15 weeks?

DOLAND: You live in Santa Fe, which has more artists and people with PhDs than any other city of its size. Nearly half the city’s economy is tied back to arts and culture. But after redistricting, the Third Congressional District now goes all the way down to the southeastern corner of the state, which makes its money in oil and gas and ranching, totally different industries, different culture. How would you persuade a Roswell Republican to vote for you?

LEGER FERNANDEZ:  I’m a daughter of rural New Mexico. I understand rural issues very well. My district right now is a rural district. I am a champion of rural issues in Congress, and that’s why I actually have a whole pamphlet of all the money and all the resources we are bringing to ranchers, to farmers, to acequias. You know, there are some really good programs that I have championed that we are bringing to rural New Mexico, and as a daughter of rural New Mexico I understand those issues, I was flipping burgers at my uncle’s rodeo you know, and riding the mule, which is a very old timey farm equipment, like, I get these issues, and I’ve been working on these issues not just for the last two years, but my entire career has been dedicated to building rural health clinics, to addressing issues in rural New Mexico. 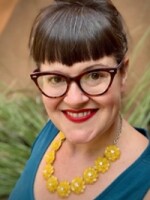 Jeanette DeDios
Jeanette DeDios is from the Jicarilla Apache and Diné Nations and grew up in Albuquerque, NM. She recently graduated from the University of New Mexico in 2022 where she earned a bachelor’s degree in Multimedia Journalism, English and Film. She’s currently a part of the Local News Fund Fellowship where she will be working with KUNM-FM and NMPBS during her 9-month fellowship where she will gain hands-on newsroom experience. Jeanette can be contacted at jeanettededios@kunm.org or via Twitter @JeanetteDeDios.
See stories by Jeanette DeDios